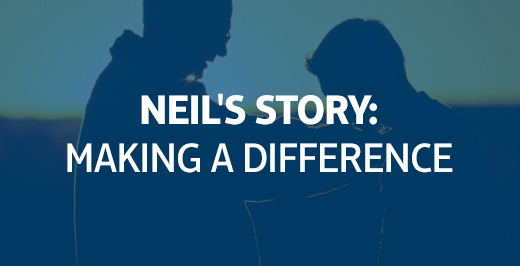 COACH Volunteer, Neil could well be your next door neighbour. A family man with two children of varying ages, working for a small business, and volunteering at his local church. Despite the demands on his life, Neil still finds the time to mentor a young man through LifeCare’s COACH program.

Since July 2013, Neil has mentored Kirby once a week after school. They play street cricket, kick a soccer ball around, or just have a chat. Kirby lives with his parents but family life is a little strained. With Neil, Kirby receives some one on one attention, some quality time with a male role model, and the opportunity to discuss his goals, opportunities and ideas on how to navigate the teenage years.

LifeCare’s COACH program trains volunteers who would like to support a young person in need of an older role model. All volunteers are vetted and must have appropriate Police and Department of Justice checks, and have successfully completed COACH training. Their reward for their volunteerism is giving a young person some much needed attention, and focus for their future.

Given his previous life experience as a single dad bringing up a son and daughter alone, Neil felt he could contribute to LifeCare as a COACH volunteer.

“When I did the COACH training I thought it would be difficult. But it’s not a tough gig at all. “The coaches are blessed as much as the coachee… in fact sometimes I think we get more out of it,” he said.

“Kirby is in his second year at high school and he’s a fantastic kid. He has some stresses at home so he looks forward to one on one attention when we get together.

Neil sees his mentor role as an opportunity to pay Kirby some attention, to discuss goals for his future, and help to steer him in a positive direction.

Lifecare’s COACH Mentors are at all ages and stages of life – university students, retirees, home makers, part time workers and senior executives.  Neil’s advice to people contemplating becoming coaches is, “Don’t think about it any longer. Just do it. You will love it!  “I think the mentors get just as much out of it, if not more than the coachee” Neil added

YOU can become a Youth COACH too and help make a difference in the life of a young person!  Please email Christina for further information on how to be one.